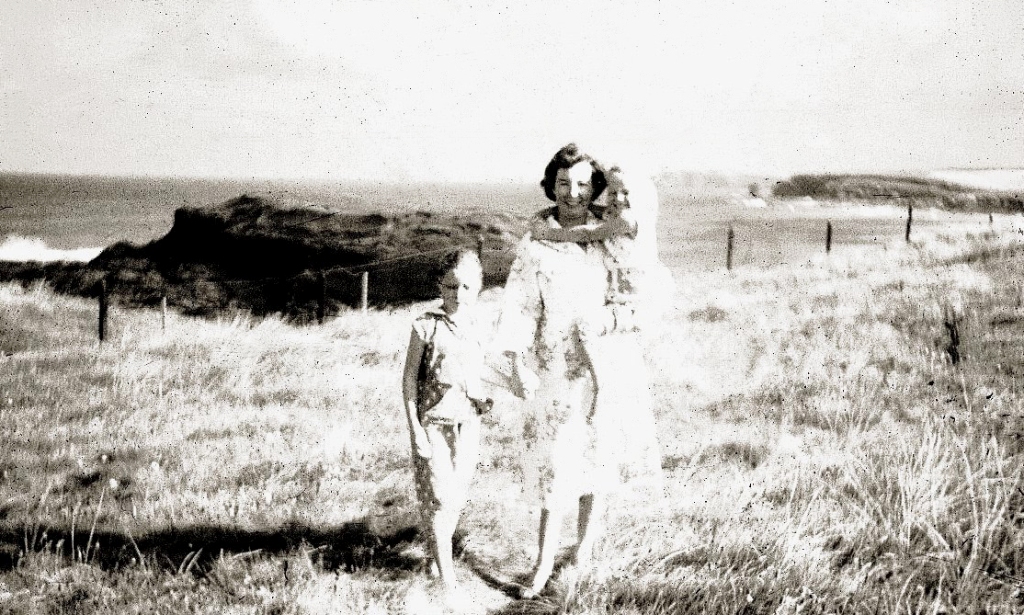 My connection with Trevose Head

My love of Trevose Head goes back to my childhood and has been a major influence on my creative development. It is the result of my mother’s wish to bring her family to Cornwall each summer so that she could share her own love of the place where she grew up.

Our family stayed in Parson’s Hut, a tiny stone hut that had been restored by a friend of my mother’s family. Reputed to have been the home of a smuggler or shipwrecker called Tom Parsons, the hut was as basic as one can get, with no electricity or running water.

Cooking was done on Calor gas and the loo was a small outdoor affair at the end of a long (to small girls in long nightdresses) windswept path that nestled into the sand dunes. We ate our meals squashed in on benches surrounding a square, slate topped table in a tiny space with two windows looking into an old walled garden.

“The summers I spent at Trevose Head as a child made me who I am today. I loved the joy and simplicity of time spent in the rock pools, on the beach or in the sea. Tired but invigorated by long walks head bent into the wind and rain along the footpaths of the headland, our family evenings were spent storytelling beside a driftwood fire, or listening to the fog horn and watching the shadowy French Crabber tuck itself into the headland for the night. Sleep was spent dreaming of smugglers and old Tom Parsons, the alleged shipwrecker and smuggler who had built the hut we stayed in.

My parents were incredibly relaxed about us venturing out alone. They taught us well about the many dangers that lay in wait for the naive and expected us to be sensible. So my summer days were spent exploring the headland, lying in the grass listening to the sky larks singing far above, or nose pressed into the wild vetches and sea pinks examining the minutiae of bumble bees or chasing butterflies on the maritime heathland.

Out in Booby’s Bay we hoped for success in crabbing in the crevices of the rocks far out toward the sea on a Spring tide. We caught prawns in our nets in the rock pools at Constantine which we took back to Parsons Hut and boiled up in sea water to make prawn sandwiches. And we swam and surfed in the sea, rolled giddily down the steep sand dunes, and flew old fashioned box kites in the wind.

“Above all, I identified with the ancient peoples who lived there in pre-historic times and this forged in me the spirit of the hunter-gatherer which has guided me throughout my life.

On wet and windy days it would take both my sister and I leaning on the door to open it against the force of the wind. To keep us in good humour, we would all don plastic macs and walk the footpaths, wellington boots slowly filling with water as it ran and dripped from our macs into our boots. We exalted in the smells of wet herbage and salt winds.

At night my mother read us stories like Worzel Gummidge And Saucy Nancy while we listened to the deep bellow of the fog horn on misty nights and watched the blinking of the lamp up at Trevose lighthouse. Occasionally an old sailing vessel would tuck itself up into the bay for the night. It seemed to drift in like a ghost ship and nestle up close to the blow hole. My mother said it was a French crabber that used to illicitly fish the waters around Padstow. I liked to imagine all manner of nefarious smuggling activities involving kegs of rum or such, being offloaded into the cave that led through to the blowhole.

It was an idyllic life and I would cry bitterly when the long summer ended and we had to pile our sandy clothes and beachcombed treasures into the car and make the long journey back home. I thought my heart would break and never be repaired every time. So much can a small girl love a wild place.

Now, in my sixties, I feel it is time to give something back and help preserve this precious habitat so that it can be enjoyed by future generations.”

And so I am eternally grateful to my mother for instilling in me her own knowledge and love of this most special of places which she herself had gotten from her own father. And eternally grateful too, to my father, the original hunter gatherer in our family who would find and forage anything that could be eaten, who took me fishing off the rocks of the headland and in the incoming tide at Constantine, showed me how to use a crab hook and cooked and helped me peel the tiny prawns we caught each day.

Parson’s Hut – now owned by the National Trust – stands on the cliffs above Booby’s Bay sheltered by and looking out at Trevose Head.

I have arranged with the South West Regional National Trust  to pay my donations directly to them on a periodic basis. You can see how my campaign is going by visiting my Just Giving page at: https://www.justgiving.com/fundraising/madeleine-jude