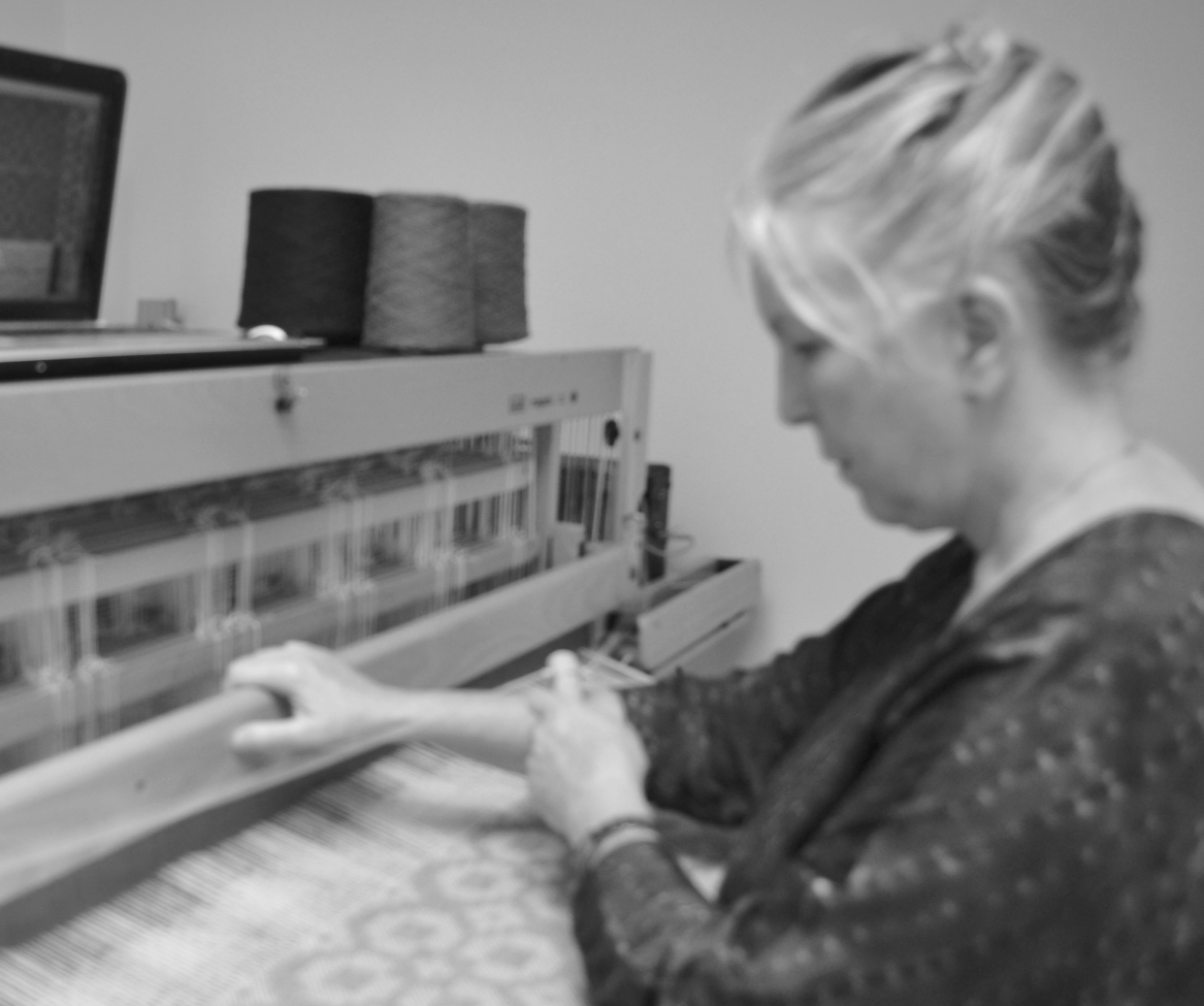 Just when does a love of textiles, a passion for learning ancient crafts and the desire to experiment with pattern, colour and texture begin? I believe it starts very early, just as a love of trains, the sea or sweet things begins, when we are tiny children. Certainly I can trace these things back to when I was very small.

Hardly surprising, coming from a family (on my mother’s side) of Lancashire mill managers, spinners and weavers – at Lowe Mill, Hindley during the 19th and early 20th centuries, back further to the pre-industrial Manchester silk weavers and further back again to the early yeoman sheep farmers and weavers.

My first job was in Covent Garden working for the famous costumier, Bermans and Nathans, making costumes for films and London theatre. It was a wonderful time and because costumes in films needed to look authentic in close up, the costumes were made using authentic techniques. Fingers would be raw from boning corsets or crinolines but what I learnt in that first year has been drawn upon ever since.

My first serious attempts at producing textiles, rather than simply making things with them, began when I moved to North Cornwall, Living in a beautiful and ancient mill house, surrounded by sheep, wild flowers and water, I started – in true hunter-gatherer style – to collect scraps of fleece that I found hanging from the barbed wire surrounding the nearby fields. In the beginning it simply seemed wasteful to leave it there but slowly I found myself thinking about how such gleanings might have led our most ancient ancestors from fiddling with the fibre (which I did as I walked the violet and primrose clad banks of the abandoned leat that had fed the wheel beside the derelict mill) to purposefully twisting, pulling and drawing out and twisting again, to create the first spun yarns.

I twiddled and fiddled for a few months before one day I went home, found a potato and a crochet hook, stuck the hook into the potato and made my first rudimentary drop spindle, and taught myself how to spin. Inevitably, after three or four days the potato withered and dropped off but by then I had enough yarn to knit my first pair of handspun bootees for my first born.

A seed had been planted and like all good seeds it just grew and grew. I started to dream of spinning a whole fleece and a friend mentioned that they knew someone who kept Jacob sheep who had fleece to spare. Somewhere in Truro I bought a spinning wheel, the fleece was purchased and I started to teach myself to spin on a wheel. This was the 1970s. Cornwall was a remote country and sadly one where these crafts had disappeared, and we really were the vanguard for a craft movement which is thriving today. But back then there was no one to teach these ancient skills.

The yarn started to flow and I began to wonder if I might also try to make cloth. My then mother-in-law, an embroiderer, offered me her 2-shaft floor loom, a beautiful thing in itself and hand built for her in Holland by her father. But how to weave? I approached this as the daughter of an engineer. Break it down into the individual processes and look for what was at hand that could help me do each job.

So my first warp was wound by passing the yarn around the legs of two upturned chairs. My precious bundle was carried to the loom and, starting at the back, I slipped the end loops over the pole at the back and wound the whole thing tightly around the beam. I cut the ends and fed them through the eyes of the heddles, then through the reed and tied them to the pole at the front. I made my first shuttles from pieces of wood, or pieces of card if I wanted to work with a number of different colours tapestry-style, and made a start.

With two shafts I was limited to plain weave or tapestry weaving. And my first project was a rug. But I had not got far before I started to craved colours other than the various natural shades that you can get from a Jacob sheep. I had found an old book on natural dyes in the equally ancient bookshop of my nearest town, Padstow, and armed with this and my plant identifying book, set off around my garden. Up came beetroots – the misshapen ones – and I imagined wonderful reds. Of course what I got was a sort of rather drab mustard colour. Out into the wild valley I went to collect blackberries only to achieve a disappointing bluish grey that faded. And so it went on, that first year, until by the winter I had woven my first smallish woollen rug, on a string warp bought in town from the camping and hardware shop belonging to my mother’s old friend Donald Rowe.

A new passion and fascination had begun which would come with me through other lives – farming a 5 hectare mountain farm in Portugal where I spun up fleeces bought from the lonely shepherds of the Serra de Monchique. The loom could not follow but with the generosity of our Portuguese neighbours who allowed us to cut some of their coppiced eucalyptus poles we made one. I had taken with me a book about Navaho weaving and we managed to build a Navaho loom using the poles and rope, which took pride of place against one of the walls of our old Portuguese farmhouse. More yarn was spun, more rugs begun and the awe and respect I have always felt for the resourcefulness of our ancient forbears deepened.

Children, allotments, work and more occupied me for many years after my return to London but when my children grew and flew the nest, life found its own rhythm again. As happens with so many people it was a long spell of serious illness that led to a reappraisal of my life and with it a reawakening. The desire to return to a way of life I had so enjoyed, a quieter, slower and more creative life hit me suddenly, late one night, and seemingly out of nowhere.

A chance encounter took me to the south coast to rescue an incredible collection of spinning wheels, fleeces, looms, shuttles, books and more, which were in desperate need of a new home. Handweavers Studio in North London helped me to brush myself down and begin on a new journey of discovery.

I completed a two-year Diploma in Handweaving which has been developed by Handweavers Studio. This enabled me to study with teachers from the UK, Europe, Canada, and the US, and gave me an incredible grounding not only in the practical craft of weaving by hand but also in design processes, and in innovation, experimenting with new weave techniques and new materials.

I like to think of today’s handweavers, spinners and dyers as being at the forefront of new ideas, breaking rules, innovating, stepping out like the path finders and inventors of early peoples pushing all the boundaries to see what else we, as human beings, can dream of and do.

So there I am… part weaver, part spinner, part dyer, part explorer. I have a number of looms – a small sampling table loom, a 12 shaft floor loom and a 32 shaft dobby loom which I use for my most complex weaves. All my throws are woven on this loom and the dobby interface enables me to weave with such a large number of shafts. I design all my textiles, and extensively sample before weaving proper begins. That way I am assured that whatever I am weaving will be fit for purpose. I use the best UK sourced yarns. And I complete all the stages myself including the finishing of the textiles and sewing in of labels.

If you would like to learn more about my way of designing and weaving you can read about these in my blog.